Like the Greek Hydra, COVID has many heads; social, public health, political, economic, corporate interests, global communications, science, research, biotechnology, verifiable facts, conspiracy theories, educational impact, small business failures, psychological consequences; anxiety, depression, suicide, expanding poverty, and many more. And each of these facets involves ‘the numbers.’ And the numbers are all based on a theory called infectious-contagion.

Tom’s insight goes deep, to the very heart from which all of Hydra’s heads emerge. Tom and his colleague, Sally Fallon Morell’s (Founder of the Weston Price Foundation), new book The Contagion Myth, why viruses, including coronavirus, are not the cause of disease, challenge the very foundation of COVID, as a cause and implicitly challenging equally all the proposed preventions and treatments, that illnesses are passed from one person to another.

“Everyone knows microbes and viruses are contagious, so it must be true.” But is it true? Is contagion proven? And more importantly; what if infectious contagion is false? What then?

If I only had a brain

We have all been shocked, overwhelmed, inundated with stories, conflicting data, social manipulation, and unprecedented restrictions, locally and globally. I maintain that this shock-therapy is not random or spontaneous, rather by design.

Based on deaths per capita, the death rate for COVID-19 is 0.009%. That means the average person’s chance of surviving is 99.991%... They’ve been wrong about the initial risk assessment, testing, preventive measures, mask-wearing, and social distancing. They’ve conflated “cases” or positive tests with the actual illness. They’re also guilty of errors of omission [and censorship], not telling us what medical doctors and scientists know to be helpful.

Ironically, five of the six countries with the lowest death rates (ranging between 0.00003% and 0.006%) did very little in terms of pandemic response; they didn’t shut down or order people to stay home.

Yet, we’re told these measures are absolutely necessary and must continue, perhaps indefinitely. This too creates massive cognitive dissonance, as it goes against all logic. If an action doesn’t result in an observable benefit, it simply doesn’t make sense to continue, let alone claim that was and is necessary. (See CNBC below.)

A recent poll by Harvard, Oxford, and Universita Boconi found Millennials believe 2% of their generation will die from COVID-19. “That’s 10,000 times more than the reality,”

Also, the U.S. government has purchased 100 million doses of a COVID-19 vaccine still under development by Pfizer and BioNTech. As noted by Dr. Lee Merritt, we keep seeing how drug companies fund working groups on diseases, and then when the disease breaks out, those same drug companies make billions in profit.

But aside from profit… there’s another reason behind the illogical pandemic responses we’re seeing. In a few short months, we’ve been dramatically shifted from a state of freedom to a state of totalitarianism. And the way that was done was through the technocratic mechanisms of social engineering, which of course involves psychological manipulation.

So confusing, polarized, and up-side-down are the issues that it is nearly impossible to keep one’s head above water, not unlike being caught and tossed about by a giant wave surfing. Below is the way CNBC describes what is taking place today brought to you by Bill Gates: (Gates Foundation Funded Org. IHME Projects Grim New Death Counts for World)

It is being proposed that technology, artificial intelligence, more properly ‘machine learning’, can and will soon replace human teachers and physical classrooms, that digital systems will tease, challenge and program each student with interactive screen experiences that will lead to predefined, conditioned outcomes, far more efficiently, with greater precision and most importantly control, than sloppy humans could ever manage. When viewed from within the realm of existing knowledge, why would anyone object?

What is generally not considered are the limitations of existing knowledge, not only as data or content, with its implicit misinformation and propaganda, but more deeply, structurally, as a state of consciousness, and the simple fact that screen media filter out the most important qualities and capacities that define being human.

We are faced with a breakdown of general social order and human values that threatens stability throughout the world. Existing knowledge cannot meet this challenge. Something much deeper is needed, a completely new approach. I am suggesting that the very means by which we try to solve our problems is the problem. The source of our problems is within the structure of thought itself.

Education as we know it, even most alternative educational models, exist in, and are limited by, the field or the state of mind David calls ‘existing knowledge.’ A metaphor that describes ‘the known’ is a house of mirrors, reflecting and re-reflecting bits of past conditioning as mental images, infinitely within the mirrored room. While this appears to be novel and vast, all this activity remains encased in the limited realm of a relatively tiny room, one small corner in the near infinite potentials of human consciousness. We call navigating the relative realities created in this house of mirrors - education.

[View this blog as a PDF]

Who Can We Trust?

I walked by a family with three young masked children. “You know," I said, “young children are exempt from wearing a mask all day. It’s not good for them.” The mother replied; “we live on a military base. It is mandatory.” It doesn’t’ seem to matter if we are ‘believers,’ or not. We do what we are told. Just about everyone does. I find that freaky. Remember The Holocaust. Six million Jews and Poles were enslaved and murdered. At the Nuremberg Trial, the reason given was simply; following orders.

It is apparent to most that the invisible terrorist, Bio-Security, has replaced the traditional villain, but the endless war for control and the money, don’t forget the money, rages on. With rare exceptions we hear the same words over and over again: infected, new confirmed cases, yesterday: 100,000 tested positive in one day, mounting death toll, on all the media platforms, all over the world. We have seen how easily the populations of the world obey and comply.

Far from being "neutral" media predetermines who shall use it, how they will use it, what effects it will have, on individual lives, and what sorts of political forms will inevitably emerge. Consider that more than 3,000 architects and engineers have signed a petition denouncing the official 9/11 story burned into our brains, over and over again, by the same coordinated media coverage, plans exploding, buildings collapsing. Seeing is believing. Which reality prevails? Who can we trust? See Suckered by the Numbers, attached. Very important.

The Sky Is Falling and Red Painted Butts

(Challenging times for parents in an age of assumptions)

I don’t want to live…

A nightmare is a frightening dream that, while dreaming, is mistaken for reality. Thought is a virtual-reality and like a dream or nightmare, it superimposes its make-believe over something much more fundamental, our true authentic nature. Growing exponentially, and for countless centuries, the enchanting dream called thought, memory, and culture blankets human consciousness like thick black smog, rendering humanity’s natural heart and mind faint, a ghostlike shadow. So thick and deep is this enchantment that entire human capacities are forgotten, not modeled and lost in a single generation, while the dreaming mind doesn’t miss or even care about what has been lost, a dehumanizing cycle that spawns even more loss. And to this, we now must add technological virtual-reality, media, and the instantaneous dream-theater called the internet, empowered and controlled by the same enchantment that unifies and covers the earth. For all but a very rare few, this enchantment is all that most ever know.

Our Children Have Been Cheated, Robbed

How did this happen? Easy. After WWII the Nuremberg Trials assessed how the Nazi propaganda machine had been so effective. From this, the Fairness Doctrine was established in 1949 to prevent the same thing from happening in the United States. The Fairness Doctrine required that stations provide free air time for responses to any controversial opinions that were broadcast. With the repeal of the Fairness Doctrine on August 5, 1987 — stations could broadcast editorial commentary without having to present opposing views. And with that, propaganda-advertising and by implication censorship, became the norm.

How Fear of a Virus Changed Our World 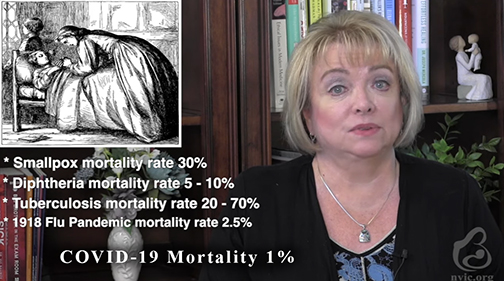 Print the PDF for comprehension

Note: Yes, the seasonal epidemic is over, but the threat to civil liberties has just begun. Barbara is one of the most knowledgable professionals on the harm of vaccines and government vaccine policies. This presentation is an essential overview of what the New Normal will look like if we allow it.

Right now, people around the world are living in fear of being infected or infecting someone else with a new coronavirus that can kill those most vulnerable without warning. Along with confusion and uncertainty, which prolongs fear, many of us are traumatized by the authoritarian measures governments have taken in response to the COVID-19 pandemic that began in China in late 2019.

The “new normal” is disorienting, like we have taken a hit to the gut and then to the head that we didn’t see coming. Maybe that is why so many Americans, who value freedom of speech, religion, assembly, privacy and the right to work, have given those constitutional rights up, without stopping to think through the ramifications of the larger precedent being set.

We are slowly coming out of shock five months after the U.S. Centers for Disease Control declared a public health emergency on January 31, 2 which escalated six weeks later into a social distancing lockdown when the World Health Organization declared a COVID-19 pandemic on March 11. 3

Questions About the Lockdown Response to COVID-19 Pandemic

There are lots of questions being asked now about whether the lockdown response to the new coronavirus has matched the threat, questions like:

It’s over and has been for weeks. We all do our best to make the right decision with the information we have. Forgetting, or not realizing, that public-policy can be based on unproven, outdated, false or even fraudulent assumptions, it is our mutual responsibility to do what is necessary to correct the policy.