What if everything you have been told might be wrong?

What we call ‘science’ begins with a hypothesis, a theoretical proposal, followed by a series of repeatable experiments that attempt to prove or disprove the theory. Over time, assumptions about proof or truth become fixed. Dogma replaces inquiry, leading to social, educational, political, and profitable institutions built on what is believed to be ‘the truth.’

As new insights emerge, what was assumed to be true or proven may be revealed as limited, wrong, or even fraudulent, based on sloppy methods or even cheating, opening the way for a new theory to be tested and proven, which challenges dogma and its institutions that fight to preserve their beliefs. In this way, all so-called scientific facts are open to reexamination. That openness to question strongly held beliefs or dogma is the essence of science.

As Robert F. Kennedy Jr., pulled back the curtain, revealing systemic fraud and corruption in Big Pharma and the captured regulatory, research, education agencies, and people they control, “The Viral Delusion Documentary Series – The Untold Story Behind The Pandemic,” does the same for the dogma called viruses. If I made a documentary on the past two years; the collusion, coordinated planning, forces involved, and where it is heading, this is the story I would tell.

Have you watched The Viral Delusion yet? If not, I highly recommend you do. It features the growing group of doctors and scientists dismantling the illusion of virus theory to understand the real causes of disease. Watch it here: 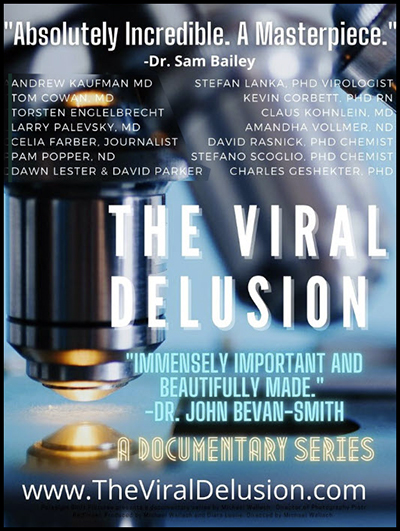 The doctors, scientists, and journalists featured in "The Viral Delusion" examine in detail the scientific papers that were used to justify the pandemic, and what they find is shattering. In this shocking, five-part, seven-hour documentary series, they explode every major claim, from the “isolation” of the virus to its so-called genetic sequencing, from the discovery of how to “test” for SARS-CoV2 to the emergence of “variants” that in reality, they explain, exist only on a computer. Their point: the so-called SARS-CoV-2 virus exists only as a mental construct whose existence in the real world has been disproven by the science itself.

They then go back through history to reveal how the birth and growth of virology has led to massive misunderstanding and misdiagnosis of disease: from Smallpox to the Spanish Flu, Polio to AIDS, to COVID itself – putting the pandemic in a whole new context better understood not as settled science, but the tragic culmination of misunderstood biology by the growing cult of virology, built on pseudo-science, to which much of the rest of the medical profession defers without understanding or examination, and the tragic consequences that have been wrought in its name.

In 2019, the virologists took center stage, and for the first time on film, their methods, miscues, and tragedy they have wrought are put under the spotlight, revealing the extraordinary leaps of fantasy buried in their methodology, the contradictions quietly acknowledged in their papers, their desperate effort to change the language to justify their findings, the obvious incongruence of their conclusions and the extraordinary stakes for our entire society in whether we continue to blindly follow their lead into a full-scale war against nature itself.

EPISODE ONE
Behind The Curtain of The Pandemic. The Pseudoscience of SARS-COV2.

EPISODE TWO
Monkey Business. Polio, the Measles, and How It All Began…

EPISODE THREE
The Mask of Death: Smallpox, The Plague and The Spanish Flu

EPISODE FIVE
Genetic Sequencing The Virus That Isn’t There

As scary as our times are, they are pregnant with possibilities: the possibility of a wider understanding of our health and our politics, the possibility of working together to free ourselves from misguided medical authorities, disastrous health protocols, and the corruption and injustice that leads to poor access to healthy food, limited access to fresh clean water, dwindling opportunities to breathe fresh clean air, lives filled with extraordinary stress and the un-stopped toxification of our planet – the known causes of disease.