The We Are The Expendable Farmer

My last post, Machines Can Never Love, explored how the current global crisis is not a spontaneous event, rather a snake-like constellation of dark forces that wind back in time for decades, even centuries. To understand what is taking place today one needs to see this continuity and how it is attempting to define our future, if we let it.

A colleague from India shared this presentation by Dr. Vandana Shiva on The Future of Food and Farming. How more essential can we get? As you view this clear, historically lucid hour, and I sincerely hope you do, superimpose the current health crisis and its alleged solution over Vandana Shiva’s description of colonialism and the future of food. You will find the same players, the same colonial mindset. With the current crisis, all of humanity is the expendable farmer. 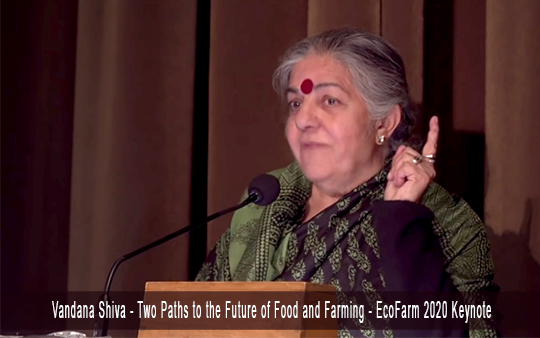 Near the end, she describes the “Poison Cartel,” as it relates to cancer. The cartel poisons our food and water that creates cancer, then sells the dying patient chemical-medicines that fail to cure the cancer, requiring ever more expensive (profitable) interventions. Pandemics and vaccines use the same business model.

Dr. There are two paths to the future of our food and farming. The first path is made by walking with nature, co-creating and co-producing with sensitivity, intelligence and care with diverse species, the living earth, and her complex web of life. This is the path of life that has sustained humanity in its diversity over millennia. Each community and culture has co-evolved its own distinctive path according to its climates, soils, and biodiversity, and contributed to the diversity of food and farming systems. The diversity of cultures of food and agriculture are united through the common and perennial principles on which life is based. Today these common principles practiced by diverse schools of ecological agriculture--organic farming, permaculture, biodynamic farming, natural farming, etc.--are referred to as Agroecology. This is the path to the future.

The second path is the industrial path based on fossil fuels and poisons. This path is the path of death. It goes against the principles of nature and life. It violates the principle of diversity and imposes monocultures and uniformity. It violates the principle of giving back and extracts from nature and farmers, disrupting ecological sustainability and social justice. It is the path to biodiversity extinction and climate catastrophe, of destruction of small farms and displacement of farmers, and the spread of hunger, malnutrition and chronic diseases. Walking further and faster down the path of extinction is not an intelligent choice. Ecological agriculture is an ethical, ecological, and survival imperative.

Dr. Vandana Shiva is a world-renowned scholar and tireless crusader for economic, food, and gender justice. Dr. Shiva was trained as a physicist and later shifted her focus to interdisciplinary research in science, technology, and environmental policy. In 1982, she founded an independent institute, the Research Foundation for Science, Technology, and Ecology, which was dedicated to high-quality and independent research to address the most significant ecological and social issues of our times in close partnership with local communities and social movements. In 1991, she founded Navdanya, a national movement in India to protect the diversity and integrity of living resources, especially native seed, and to promote organic farming and fair trade. In 2004, in collaboration with Schumacher College, U.K., she started Bija Vidyapeeth (Earth University), an international college for sustainable living in the Doon Valley in Northern India. Time Magazine identified Dr. Shiva as an environmental “hero” in 2003 and Asia Week has called her one of the five most powerful communicators of Asia. Forbes magazine in November 2010 identified Dr. Vandana Shiva as one of the top Seven most Powerful Women on the Globe. Among her many awards are the Alternative Nobel Prize (Right Livelihood Award, 1993), Order of the Golden Ark, the UN’s Global 500 Roll of Honour, and The MIDORI Prize for Biodiversity in 2016.