Following, deepening and expanding the legacies of Ashley Montagu, James W. Prescott, Joseph Chilton Pearce, and many others, Darcia Narvaez, a Professor of Psychology Emerita at the University of Notre Dame, ranked in a 2020 analysis in the top two percent of scientists worldwide, launched The Evolved Nest. https://evolvednest.org/

Please take a few moments to view the new short film, Breaking the Cycle, based on Narvaez’s book, Neurobiology and the Development of Human Morality: Evolution, Culture and Wisdom, which was chosen for the 2017 Expanded Reason Award from among more than 360 total entries from 170 universities and 30 countries. Narvaez received the prize at the Pontifical Academy of Sciences in Vatican City on September 27, 2017.

Kindred World and Touch the Future have been collaborating for years. Kindred World is an award-winning American nonprofit providing public education on creating sustainable humans through multiple initiatives since 1996.

It is an honor to share this important project with you. 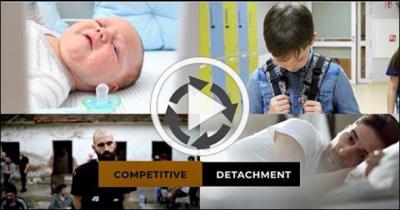 April 26, 2021 – Kindred World is proud to launch The Evolved Nest’s educational short film, Breaking the Cycle. The moving and inspirational six-minute film illustrates our capacity for breaking our current Cycle of Competitive Detachment and returning to the pattern of 95% of our human history: a healthy, peaceful Cycle of Cooperative Companionship.

Breaking the Cycle contrasts the two basic ways societies can function: the optimal approach, which most human societies through time have followed, is the Cycle of Cooperative Companionship where children’s basic needs are met; they grow into well-functioning, cooperative community members (from neurobiology and on up); and as healthy adults, they maintain the cooperative system. Currently, in the USA the opposite pattern is in place: children’s basic needs are not met, illbeing and dysregulation ensue, creating adults who are detached and distracted and keep this Cycle of Competitive Detachment going. The United Nations ranks the USA as 41st out of 41 developed countries for child and adult wellness. 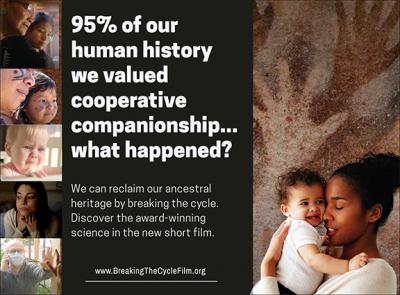 Darcia is the president of Kindred World, a contributing editor to Kindred, the first global eco-parenting magazine, an advisory board member of Attachment Parenting International and Self-Reg. She is the former executive editor of the Journal of Moral Education. She has been quoted and her work cited in The Atlantic, Time, Wall Street Journal, New York Times, Indianapolis Star, as well as in international media.

Extensive resources, including Next Steps, are also available on the website. Narvaez is available for interviews and presentations about the film and her work. You may contact her at evolvednestinitiative@gmail.com.

See the film and resources: www.BreakingtheCycleFilm.org